Now Feature: ‘What have these celebrities done to their faces?’ 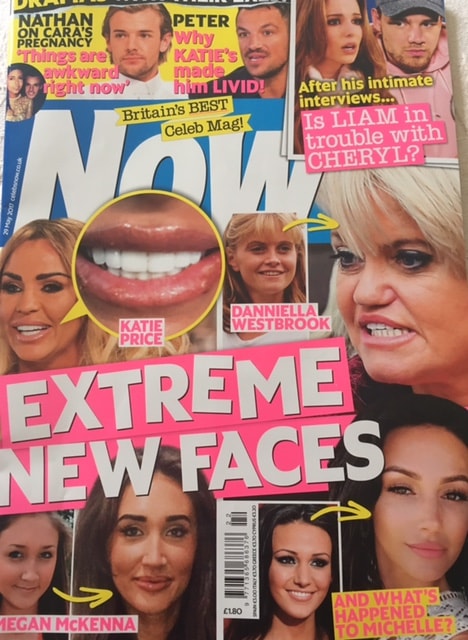 Now – ‘Britain’s Best Celeb Mag’ – looks at the significant changes in a number of celebrities’ faces.

The magazine asked Cosmedics’ founder and Medical Director, Dr Ross Perry, to give his expert opinion on what cosmetic treatments or plastic surgeries could explain a series of celebrities’ new looks.

“Katie admits she’s partial to fillers and BOTOX, but these sore looking lips suggest she’s willing to risk her health.”

‘Katie’s lip fillers may have got infected or created a cold-sore reaction. Filler can occasionally cause an allergic reaction especially if done too frequently.’

‘Her lips are twice the size they once were.

‘Megan is  young but her skin has a very smooth appearance, suggesting she’s been using Botox in her forehead and around the eyes. I’d say she’s also been having fillers in her cheeks.’

“Often regarded as a stunning natural beauty, Michelle’s always maintained that she’s never had any work done. But what does Dr Perry think?”

‘It’s lip size again. Injectable filler would achieve it, but it’s been done very well. Her skin is flawless and for someone her age I’d expect more expression lines. I’d say she’s had a small amount of Botox.’

“After drug addiction caused her septum to collapse, actress Danniella has had multiple procedures to repair the damage”

‘Her nose is completely misshapen these days. It now has the appearance of looking flat. There are signs of fillers in the lips and cheeks and Danniella’s eyes appear to be more open, which could be down to Botox.’

“It’s undeniable that Caitlyn – formerly known as Bruce – has had surgery, but Dr Perry thinks the work she’s had done is extensive.”

‘This recent image of Caitlyn appears much more feminine. I believe she’s had a facelift, brow lift and eye lift. Botox and fillers have also been used to achieve a youthful complexion.’

“Friends star Courteney shows no sign of ageing and Dr Perry thinks this is down to clever cosmetic enhancements.”

‘There’s barely a line in sight, particularly around the eyes and forehead, suggesting she’s been using Botox. I’d say it’s likely she’s had both lip and cheek fillers, which have helped to fill out her wrinkles.’

“Miley’s younger sister is stepping out on her own and it seems she’s already getting used to Hollywood’s superficial ways…:”

‘Based on this image, I’d say Noah has definitely had lip fillers.

‘I wouldn’t advise her to have any more. She has a slightly waxy look, which could suggest she’s also had Botox. Her cheeks look more rounded, meaning she may have had fillers.’

“Everyone knows Kylie’s had lip fillers, but is that where she draws the line?”

‘She looks like a completely different person, I think this is down to some very good plastic surgery. I believe she’s had her nose reshaped, fillers in her cheeks and Botox around the eyes and frown area. This has helped to lift her eyebrows, giving her a more arched look.’

“German glamour model Martina has admitted to having three rounds of melanin injections to achieve what she described as a ‘crispy brown’ tan, and claims to have the biggest boobs in Europe.”

‘Wow, wow, wow! I can honestly say I have no idea what’s going on here. There’s a significant amount of filler in Martina’s lips, giving an entirely unnatural look, and extreme fillers in her cheeks, resulting in a ‘chipmunk’ appearance. Less is often far better than more.’

See the Feature in Now Magazine: 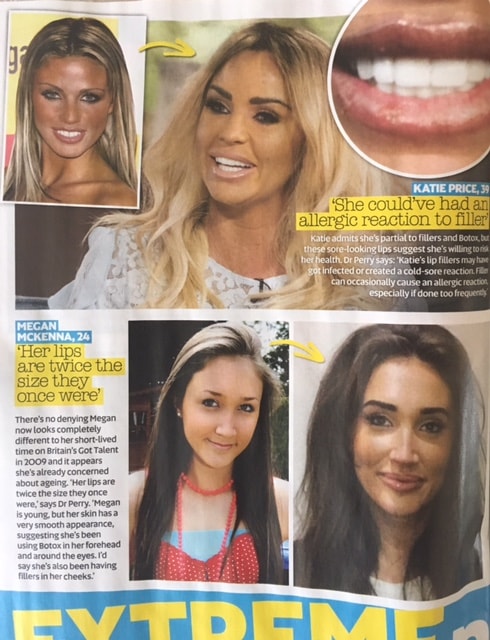 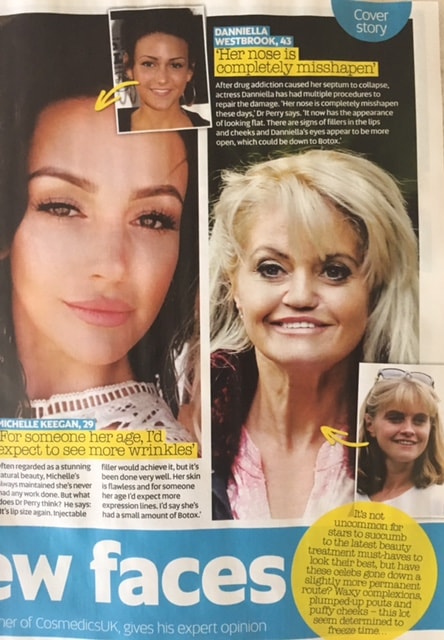 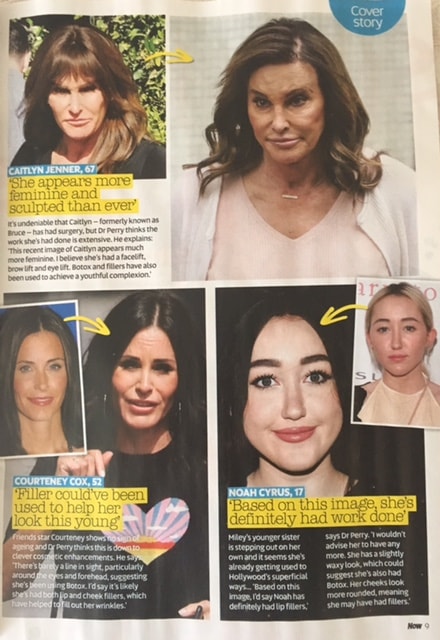 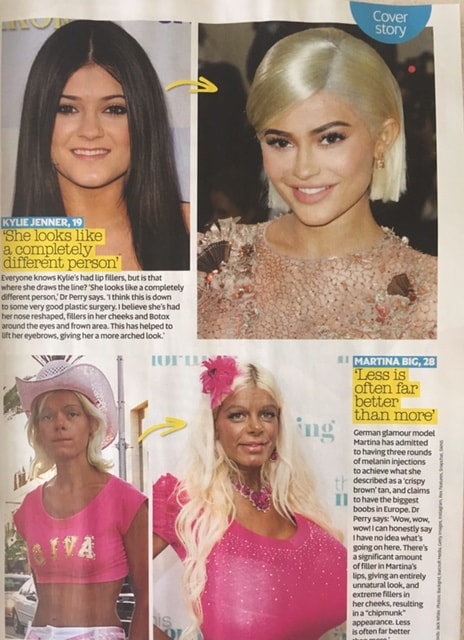 Dr Ross Perry regularly provides expert comment and advises the media on a range of skincare and health-related issues for a variety of UK media and publications.

He has particular expertise in skin surgery mole removal and melanoma; having removed thousands of moles in his career, both within the NHS and privately through Cosmedics Skin Clinics.

Cosmedics Skin Clinics was established in 2003 and has built up an excellent reputation for cosmetic and medical skin treatments, carried out by GMC Registered Doctors.  The company offer a full range of cosmetic treatments, including popular lip enhancement and wrinkle relaxing injections, dermal fillers; plus medical treatments including mole removal, thread vein treatment and excessive sweating injections.