New! Has Posh had Botched BOTOX?

Cosmetic Surgeons tell New! that Victoria Beckham may have dabbled with BOTOX/FIllers

After she was photographed for son Brooklyn’s 18th birthday, rumours started that Victoria Beckham had undergone some kind of surgical or non-surgical treatment.

One fan wrote ‘Has she had a brow lift?’ and another speculated ‘She looked very happy when the kids were younger. These days, has she had a eyelid lift?’

New! Has Posh had Botched BOTOX?

Cosmetic Surgeon Dr George Samouris thought that it was more likely to be injectable treatments rather than surgery. He explained:

“I think she’s had botched Botox, as the right eyebrow seems to be higher than the left and she also looks like she may have had thin fillers injected everywhere on her face.”

“It looks like they have tried to simulate a brow lift, which has worked only on the right side as too much Botox has been injected on the left side of her forehead.”

Dr Ross Perry is an expert in non-surgical cosmetic and anti-ageing treatments. He agreed with the appraisal that injectable treatments were the likely verdict, saying:

“For someone her age  you would expect more lines, particularly around the eyes and nose to mouth.

“In my opinion it looks like Victoria has regular injectables such as Botox, filler and laser treatments, but there’s a balance of keeping the signs of ageing at bay versus overdoing it. fillers have helped keep the volume in those areas.”

Victoria has not admitted to having any cosmetic treatments or injections. However, following similar speculation, she did previously admit to having had a breast augmentation after removal of the implants. 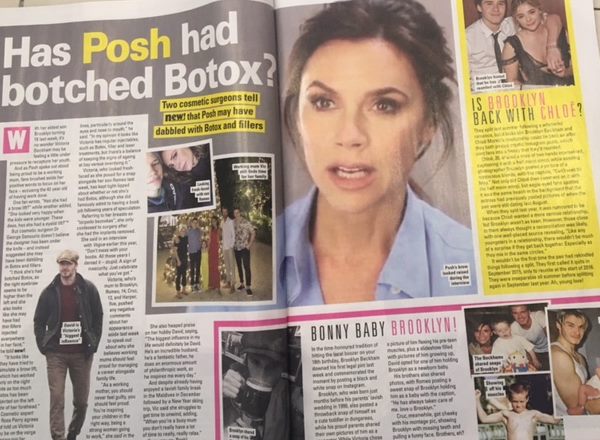