‘Get help before you have a heart attack’

Coleen Nolan’s time in the Big Brother house showed her smoking and drinking excessively, which combined with a poor diet and lack of exercise finally took its toll in the shape of a heart scare.  Coleen was rushed to hospital with chest pains before the Big Brother final and was given a warning by doctors that her lifestyle was to blame.

She described the experience for New magazine:

“I woke up with terrible terrible chest pains. firstly I was thinking it was heartburn, probably from the eight cans of rum, but they were really bad and I was shaking. I couldn’t wake up – I was just sleeping the whole time.”

Paramedics visited her in the house:

“They did two ECGs and they were fine and my blood pressure was fine.”

But Coleen was referred to hospital to be on the safe side, where she had more ECGs as well as X ray and blood tests. Coleen says the outcome was not of immediate concern:

“It just came back that it was over-excess and stress-related.”

New magazine asked GP and founder of Cosmedics Skin Clinics, Dr Ross Perry to give his expert opinion on Coleen’s health. Dr Perry estimates that 51 year old Coleen is around 14st 7, which equates to a BMI of around 33.7. He comments:

“Coleen’s chest pains in the house could be a warning sign of something more serious which needs to be addressed immediately.

“Making the right changes to her diet, exercise regime and giving up smoking will definitely help. But if she continues on this dangerous path, it will inevitably lead to more serious problems such as heart disease. And at the very worse, it’s very likely she could have a heart attack.”

“I’d advise Coleen to follow a calorie-controlled diet that’s low-fat, low-sugar and no alcohol. She should start with an exercise regime tailored to her needs so weight loss is steady and consistent and not too dramatic. A BMI of 25 would be ideal for her age and height.” 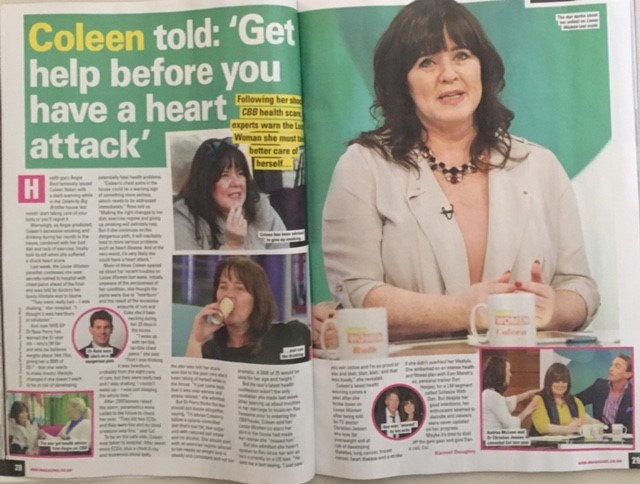