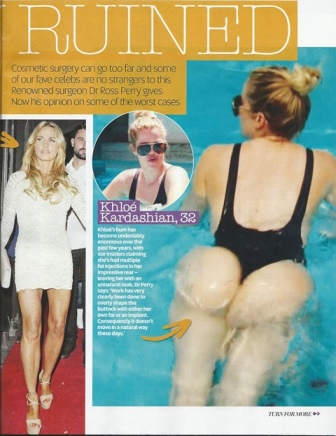 The Geordie Shore star has previously said she’s ‘addicted’ to cosmetic surgery, but claims not to have had a boob job.

Commenting on a picture which appears to show an implant, Dr Perry said:

“Not wearing a bra is not helping Chloe. Implants can sometimes move with time and occasionally need repositioning if the droop becomes too prominent.

“The short-term fix for Chloe is a good bra, but she may require a different implant at a later stage go even things out.”

Katie Price has had liposuction aged 20, but claimed it didn’t work as her thighs were ‘too skinny’.

“Too much liposuction on her legs has made them very straight. The lack of curves and hip shape has given her a less feminine appearance.” 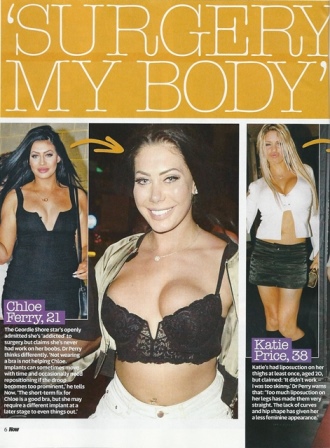 Khloe Kardashian is rumoured to have enlarged her bottom with fat injections, leaving it looking unnatural, as shown in a shot of her swimming.

“Work has very clearly been done to overly shape the buttok with either her own fat or an implant.

“Consequently it doesn’t move in a natural way these days.” 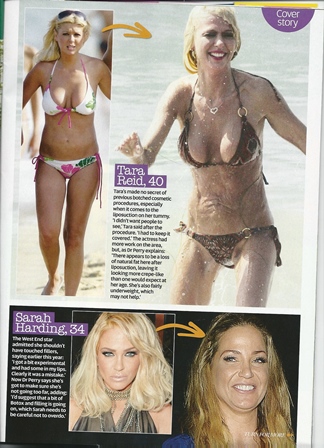 Tara has confessed to previous bad experiences with cosmetic surgery, in particular liposuction on her tummy. She has said:

“I didn’t want people to see. I had to keep it covered.”

“There appears to be a loss of natural fat here after liposuction, leaving it looking more crepe-like than one would expect at her age. She’s also fairly underweight, which may not help.”

Sarah Harding has previously said she regretted going too far with fillers.

“I got a bit experimental and had some in my lips. Clearly it was a mistake.”

“I’d suggest that a bit of Botox and filling is going on, which Sarah needs to be careful not to overdo.” 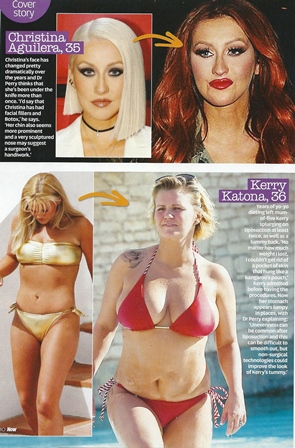 Christina’s face has changed over the years.

“I’d say that Christina has had facial fillers and Botox.

“Her chin also seems more prominent and a very sculptured nose may suggest a surgeon’s handiwork.”

After carrying five babies and dieting for many years, Kerry Katona had a tummy tuck, saying:

“No matter how much weight I lost, I couldn’t get rid of a pocket of skin that hung like a kangaroo’s pouch.”

“Unevenness can be common after liposuction and this can be difficult to smooth out, but non-surgical technologies could improve the look of Kerry’s tummy.”

He also regularly provides media comment on cosmetic injections such as Botox and Dermal fillers. He has particular expertise in mole removal, sun damage and melanoma; having removed thousands of moles in his career, both within the NHS and privately through Cosmedics Skin Clinics.